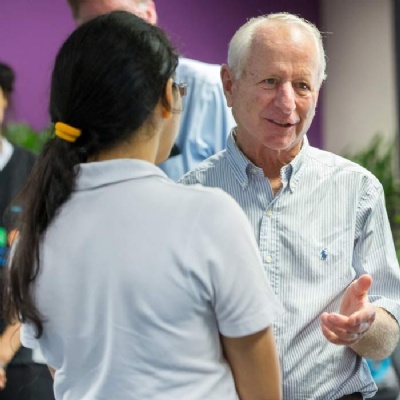 A crucial part of what makes UWC special is our belief that if someone is driven and compassionate, they should not be denied an education because of their circumstances. We offer support and scholarships to students from many different backgrounds, including underrepresented groups and young people fleeing conflict. That is possible due to the generosity of patrons such as Shelby Davis.

Davis is an American investor and philanthropist, who was introduced to UWC in the 1990s by former President of UWC-USA, Phil Geier. He is a firm believer in the opportunities that education creates for young people and saw in UWC a movement with a global reach that offered educational opportunities to some of the world’s most promising and motivated youngsters. He chose to support UWC by funding scholarships which would allow students from diverse backgrounds to access a quality education.

The Davis United World College Scholars Program is the world’s largest international scholarship programme for undergraduates, and has helped over ten thousand UWC alumni to attend US colleges and universities.

Davis has also supported the Davis-UWC-IMPACT Challenge, with which he encouraged donations to UWC schools by offering match-funding. The launch of the 2018 Davis-UWC Dare to Dream Programme, meanwhile, enabled 100 new students from disadvantaged backgrounds to attend UWC every year. From 2021, this support has been doubled through a match-funding initiative, leading to a total of 300 Davis-UWC Dare to Dream scholarships.

Shelby Davis remains one of UWC’s most active and transformative supporters, and his work has helped open doors to students who, in his words, “do not even dare to dream of a world-class education like that offered by UWC.”